by Wagstaff Watches on November 16, 2019 in Uncategorized

When you make watches for a living and as we say release them into the wild you often think where will this one end up, where will it go and what will it experience.  It’s a big world out there and what makes running a British watch brand exciting is seeing your watches all over the globe.

Last week hadn’t been a good week, we were really busy (which is good don’t get me wrong) but we had a couple of watches returned because of problems and we always feel we let the customer down when that happens and the mood at Wagstaff Towers reflects it. We had been on a suppliers visit and that hadn’t gone well and we had some shipped good stolen on route. All in all, not a top week. But … then last Tuesday we awoke to some pictures from one of the customers show the Yorkshire in fabulous surroundings – with Mt Everest as the backdrop – did our eyes deceive us 😲

No, in the middle of a truly tough trek to heights in more ways than one. Now I’m sure Andy Wagstaff won’t mind us mentioning but his picture lifted our spirits and we talked about it for hours. In the midst of that challenge here he was taking time out to take a picture. From a place called many will never see Everest Base Camp around 4800 m overlooking the twin 7000 m peaks of Tawche East and West.

That is unbelievably cool when someone does that. But he wasn’t finished – he had stopped on Remembrance Day at 11 am to think of the fallen – total respect in Khumbu Valley, around 5000 m is heartwarming to see. And there’s more – and remember this isn’t a chap we were paying form promo shots this is just kindest … He went on to get to a summit of Kala Pattar, 5550 m, as he said “our highest point…” 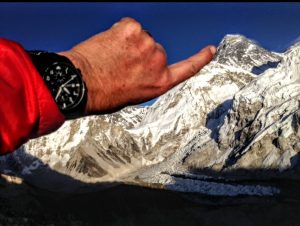 Which all means Andy has the record of taking a Wagstaff to a height no other Wagstaff (watch) has been beating the last record by over 2,000 feet when and I can tell you we worked that out there was whooping and cheering in the workshop and a massive fight to out the pin in the board of destinations. All we can say, as a little British watch brand, is a big Thank You so much, Andy, we REALLY DO APPRECIATE IT.

We have had a picture from far and wide Bali to Ecuador and lots in between and it frankly quite humbling people are thinking of us as the travel. We’re a little countryside focussed brand with a taste for getting out there and we salute you, Andy Wagstaff, you’re our hero 🙏

The picture to the post is, of course, one of Andy’s from the highest point a Wagstaff has been in the world without being in a plane. We love to see where Wagstaffs get to. Our founder Albert was a great traveler and climber coincidentally (a man of many talents) and he would be chuffed to bits to think something we produce got there. Sometimes running a watch business is the greatest thing to do when things like this happen. The customers make all this worthwhile. And before you write in we do have a little gift planned for Andy when he gets back.

What are you looking for?

If you want to be up to date with our news and receive special promotions, enter your email in the following field